Home Affects How does stress affect the heart? 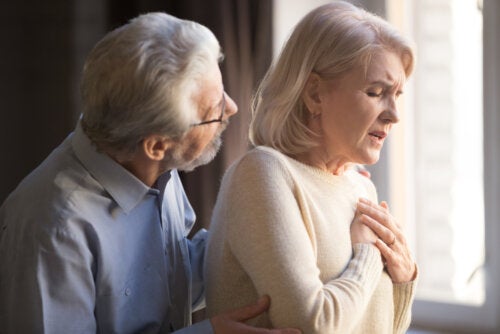 Although the exact mechanisms of the mind-body interaction are still not fully understood, emotional stress has been shown to influence a wide variety of diseases. Discover the link with the heart.

Psychological factors can negatively affect multiple organs in the human body. In this opportunity we will develop how stress affects the heart and the entire cardiovascular system. In practice, almost all medical illnesses are influenced by mental health. Mind and body are in close relationship and constant interaction. In loss of balance, risk factors are increased to increase morbidity and mortality.

Stress is the body’s way of reacting to situations that are endangering or challenging. This type of reaction is intended to protect against threatening problems.

In small installments, stressful situations should not threaten health. But instead, if they become permanent or are too intense, they could be harmful.

Stress can affect almost all general diseases, as we already mentioned, including those whose production mechanism is well known. The coronary disease, for example, or diabetes, and migraine, irritable bowel syndrome and the fibromyalgia.

How does stress affect the heart and cardiovascular system?

The negative relationship between stress and ischemic heart disease has been  demonstrated almost 20 years ago, when studying patients with coronary heart disease. Later, many other investigations confirmed the same. In any case, the exact mechanisms by which the association occurs remain uncertain.

Several hypotheses have been found by which emotional stress could trigger an acute myocardial infarction, such as an increase in blood pressure, heart rate, vascular tone, and even platelet aggregation capacity. All of them closely related to the release of neurotransmitters.

The significant increase in heart rate and blood pressure could lead to an increase in myocardial oxygen demand. In certain conditions of the patient, that is, in those who present a higher previous risk, it can lead to an acute heart attack.

All these factors also refer to certain abnormalities in the autonomic nervous system. This is the neural part that is responsible for involuntary actions, such as breathing or beating the heart.

If the person has established risk factors, such as the presence of atherosclerotic plaques in the small arteries, then the discharge from the nervous system could lead to a plaque accident. This is the situation where atheroma rupture and obstruct circulation, disrupting the flow of oxygen to the tissues.

In addition, it should be noted that stressful situations in everyday life can cause an increase in the number of cigarettes consumed by smokers. Similarly, in some people they cause deterioration in diet, with the consequent increase in blood cholesterol.

Symptoms of stress that affects the heart.

Some people are more prone to signs of stress than others, either because of their personality or because of experienced situations. For them, it will be very important to develop mechanisms that allow them to deal in a healthy way with those triggers that destabilize them.

One of the classic symptoms of stress that affects the heart is palpitations. These are accelerations of the heartbeat, with tachycardia, which feels like a pounding in the chest.

Chest pain can also be a manifestation of the problem. Not always with the presentation of the heart attack, but rather dull and insidious, like a constant oppression that oscillates between sharp and calm periods.

Tips to fight stress that affects the heart.

The recognition of the interaction of stressors and various heart diseases should favor the development of prevention strategies. There are people who are at greater risk for presenting conditions that would lead to heart attacks or strokes.

The prevention of cardiovascular events may be possible if, together with diet and physical exercise, techniques that reduce stress are prescribed. Relaxation strategies can be used at the time of severe emotional problems. In turn, it would be ideal to avoid known stress triggers.

In general, the goal of a stress management program will be to reduce the impact on the patient. Stressors will never be completely eliminated, but they can be limited, in the same way that they can be contained and turned into stimuli for individual improvement.

When should we consult the doctor.

How much stress will affect the heart, in each individual person, is impossible to predict. Despite this, the identification of problematic situations, such as bereavement, for example, should alert us to the need to seek professional help to avoid negative consequences.

Additionally, it is advisable to adopt healthy habits. Among them, specify a healthy and balanced diet, avoid smoking and excess alcohol, as well as doing regular physical activity, preferably aerobic. The sleep routine is another tool that reduces anxiety.

In addition and, as far as possible, we must avoid or reduce those stressful situations that are within our reach to be altered. All of this will not only have a positive impact on your heart health, but also your general well-being.

How to know if the intestinal flora is damaged?

How to know if our liver is inflamed?

How to Prevent an Osteoporosis Fracture

6 health problems that cause back pain