Home Affects How does tobacco affect the skin? 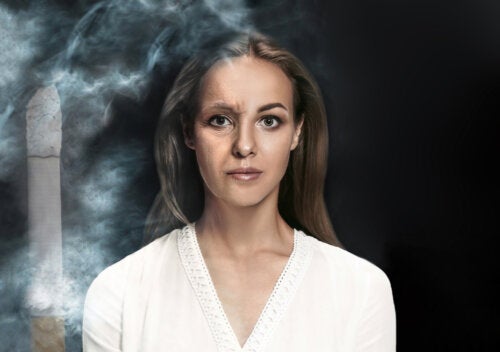 Tobacco affects the skin in many ways. It noticeably deteriorates its appearance and contributes to premature aging. It also causes serious skin diseases like skin cancer.

Tobacco affects the skin of those who smoke, but also those who passively receive the smoke. It must be taken into account that tobacco contains around 4000 toxic components, of which at least 300 are highly dangerous and can have dermatological effects. In the first instance, tobacco affects the skin because it generates undesirable aesthetic effects. Although it damages the skin of the entire body, the effects are most visible on the face. There is even a whole pattern that defines ” the smoker’s face”.

However, the way in which tobacco affects the skin is not only reduced to its aesthetic effects. In some cases, it causes serious diseases such as skin cancer. The good news is that if someone stops smoking in time, in the medium or long term the effects are reversed.

How tobacco affects the skin?

The first biological effect of tobacco on the skin is due to the increase in free radicals. These are chemical elements that damage the cell membrane. They even alter genetic information and generate anomalies in the arterioles of the dermis and epidermis. Under these conditions, the irrigation and nutrition of the skin is compromised. This is deprived of oxygen and essential nutrients, leading to dehydration  and dryness. Likewise, nicotine contains a component called vasopressin that increases blood pressure and decreases estrogens. Low estrogens increase dryness.

On the other hand, tobacco consumption decreases the absorption of vitamin A and alters elastin and collagen. The result of all this is dry skin, with low luminosity and with more pronounced wrinkles.

One of the most obvious manifestations of the way tobacco affects the skin is premature aging. This is more visible in women than in men and is especially evident after the age of 39.

Wrinkles are usually more marked around the eyes and on the upper lip, also due to the position of the face when smoking. Premature aging is mainly due to tobacco causing elastin waste to build up in the dermis, leading to collagen degeneration and later wrinkles.

Healing problems are another way that tobacco affects the skin. The smoke alters the oxygenation of the tissues, reduces the circulation and intoxicates the blood. The consequence of this is that wounds, particularly surgical ones, take longer to heal.

Smokers with chronic ulcers, especially in the lower limbs, show a more unstable evolution and difficulty in healing them. People who smoke a pack of cigarettes a day are three times more likely to develop wound necrosis  than non-smokers.

There are a large number of dermatological diseases that are triggered or worsened if the person uses tobacco. They are between them:

Tobacco also causes yellow pigmentation to appear on the fingernails and fingers, as well as on the teeth, where plaque increases. The heat of the cigarette in the mouth produces a repeated microaggression that over time can lead to lip cancer. 80% of people with this type of cancer are smokers.

Tobacco is a potential generator of non-melanoma skin cancer. Specifically, it can cause squamous cell carcinoma, a condition that is doubly common in smokers. It can also lead to cancer of the oral mucosa and increase the risk of metastasis.

Plastic pollution: how does it affect your health?

Tips to Learn Faster – Learn Without Going to School

How to know if the intestinal flora is damaged?