Home Things to know How does a person with color blindness see? 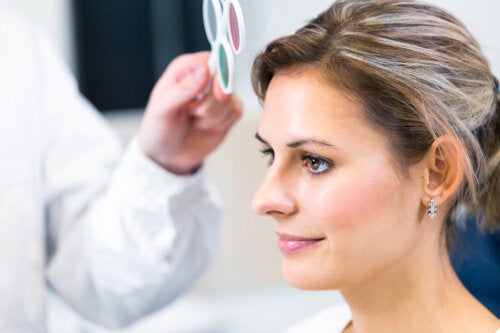 Color blindness is a genetic disease in which the perception of colors is altered. Colorblind people have varying degrees of severity, and the ways in which colors are interpreted in their brains also differ. Do you want to know more about it? Color blindness is a disease that alters the perception of colors. The human eye is able to interpret the color of things through light waves that reach the retina of the eyeball.

In the retina there are specialized cells called cones. The cones contain pigments inside, which are of three different sensitivities: red, green and blue. The combination of the three pigments gives a greater range of colors to, in this way, understand the colorful reality and not in black and white.

Once the information from the light wave is received in the cones, the impulse continues through the optic nerve. We have two optic nerves, one behind each eyeball. The path of both is combined in the optic chiasm and reaches the brain for the neurons to make the final interpretation of the information.

In color blindness, the color is not perceived normally. Although the wave of light is the same, in the colorblind individual the information is interpreted in a wrong way. It is estimated that it affects 8% of men and approximately 0.5% of women.

What is color blindness?

The disorder known as color blindness is a disease of genetics . It is passed as inheritance on the X chromosome, which is one of the sex chromosomes. Therefore, its prevalence is greater among the male population.

Color blindness is defined as the inability to discern colors. Many variants of the disease are included within this definition; from slight changes in range that are almost imperceptible, to the change of one color for another.

In general, there are three classic forms of color blindness:

Other causes of color blindness.

Although color blindness is a genetic disease linked to the X chromosome, there are other pathologies that can include it as a symptom. Among these diseases we have:

How does a color blind see?

It should be clarified that the color-blind person does not see in shades of gray, or in black and white. They may perceive a desaturation of the tones, yes.

There is also color confusion, which is understood as confusion for the rest of the individuals who do not have alteration of the cones. However, for the color blind there is no such thing as a confusion, but a way of interpreting color. He has always seen that way, from birth possibly, and that is his perception of reality.

The tests that are performed in ophthalmology offices for diagnosis are varied and subjective. The patient must relate what he sees and the colors he thinks he is perceiving in order to be compared with the so-called normality.

The most famous test is the Ishihara test , made up of number cards made up of colored circles. The differences in color between the circles are slight, and it is assumed that a color-blind person will have serious difficulties in making the edge distinction.

What if I think I am color blind?

If you consider that you may suffer from color blindness, it is important that you consult an ophthalmologist. The doctor will perform the relevant tests and determine if you have an alteration in the perception of colors. In general, there is no need to worry.  Most colorblind people lead normal lives.

How does the endocrine system work?

How wrong breathing can affect your health

Anise and stomach health: how are they related?

How to know if our liver is inflamed?